Kudos to Verizon for taking on Leadership – Mobile without Phone Numbers 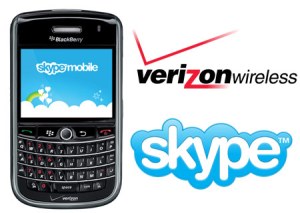 Approximately one year ago I wrote an article entitled “The Future of Mobile – without phone numbers.” In my discussion I put forth the proposition that social networks would take over the fundamental connectivity for individuals and that phone numbers would be a network “IP address”.   This article generated 100’s of emails and questions, some supportive, some not, but all thought provoking. It was clear that I had hit a nerve.

A major step towards my view of the future of mobile communications was taken by Verizon in the last week.  Verizon Announced at the Mobile World Congress in Barcelona, and later confirmed and launched at CTIA 2010, an integrated Skype calling service.  This service enables users to click any Skype username, make a call, and not be charged for mobile minutes.  This service even uses the mobile voice connectivity of Verizon for the wireless network of the call.

This is a major watershed event for the industry.  A major carrier embracing voice as a data service, with calls completed outside of the carrier’s equivalent phone number – DNS.

In fact, this capability had been  available by such applications as ISkoot.  What is big news is that Verizon is openly promoting this service and not charging for mobile minutes.   Another advantage of the Verizon version is that it is “always-on”.  I received my first Skype call on my mobile yesterday.  It just happened like any other mobile call.  It was an important business call and all I could think about at the conclusion was – that was cool.

The use of social networks and non-phone number connection services implies that that contact DNS aggregation services will become even more important.  My network contact list will be an amalgamation of my Facebook, Linkedin, Skype, Twitter,  existing phone books, AOL IM list and likely several others.  Aggregating my contact lists, storing them in the network cloud and presenting them to me on demand in a usable form is essential.

While at CTIA I was on a panel discussion with   Mike Mulica, CEO of FusionOne.  FusionOne is a leading example of such a network based contact/address book that spans social networks.  They are certainly a company worth watching in

the future, as they appear to be “on the right side of the technology curve”.

A question that remains is how does Verizon generate revenue by connecting calls for free?  Simple answers include increased data subscriptions and greater subscriber growth via churn from other carriers.    In the U.S. market, with mobile penetration approaching 90%, carriers can only increase subscribers by churning their competitor’s customers.   Since the Skype app on iPhone is not as full featured and cannot be “always-on”, VZW has given leading edge users a reason to switch NOW.

In the future I would expect connections between Skype calling capability and other applications on Verizon, especially those provided through the Verizon’s own app store.  I also expect that full mobile video calling and even video conferencing via Skype is no doubt on the roadmap.

This feature is only available to VZW smartphone subscribers , and that means a $29.99/mo data charge.

Regardless of the long term revenue sources, VZW has taken a clear leadership position in its market and now has the their competitors determining a catch-up strategy.  Kudos to Verizon on this move.

Now that I have recovered from the whirlwind week at the CTIA show in Las Vegas, I can reflect on some of the events of the week.   I have to plead guilty to “stirring the pot” and creating some interesting debate in my panel session on social networking.
The topic of monetizing social networks on mobile networks was discussed, with the obvious conclusion that advertising will have to pay a key role in any sustainable business model. The

debate ensued on the relative roles and economics of this model as it applies to the network operator and the social network owner. Network Operators have a tremendous database of potentially useful marketing data for third party application providers to utilize in maximizing the ad inventory of their products. In the past, and for good legal reasons, the privacy of this data has been honored and not exploited in a maximum economic manner. Now enter the social networks.

A social networking profile has more information than exists in a carrier marketing database. Profiles are volunteered, are deep with interests, preferences, activities, relationships, friends, etc. The data housed by the social network is a potential bonanza for advertisers. The inability of network carriers to fully exploit their consumer data could become a moot point as the mega social networks integrate their data with mobile ad networks.
The next issue that was debated was the relative power between a social network that may have over 100M members and a network operator that has 60-20M subscribers. Most business discussions with operators have a clear pecking order. In general the carrier is picking and choosing the best partners, from many, that

will maximize their revenue and customer’s needs.
There are very few application providers who have this discussion with an operator as an equal or superior level of relative strength. One example that obviously leaps to mind is Apple. The Iphone introduction and partnership appears to be a relationship between “equals”.   The existing introduction of large social networking onto mobile devices seems like a partnership of equally motivated and powerful partners, each bringing significant assets to the table. In the future, will the large social networks try to cut similar revenue sharing arrangements as Apple? Will they be able to? And lastly, will it matter.

This was the week of the annual CTIA Wireless IT show. I have been attending, and speaking at this show since its inception in the late 1990’s. This show was different from past events in a way that may not be fully

appreciated for some time. The conference promotes wireless data services to consumers and enterprises. In the early years, data on wireless networks was a real four letter word.

When I was a Director at Lucent in the 1990’s it was not uncommon to have to explain to Top executives the difference between content, enabling API’s, and operating systems. With those days in the collective rear mirrors we are at a stage where data revenue is accounting for 15% of carrier revenues and climbing. It was further announced at the show that the volume of SMS text messages in the U.S. is now 1 billion per day. On the surface everything is pointing up.

In the middle of this self congratulatory week, Walter Mossberg of the Wall Street Journal rained on the parade. His Wall Street Journal article declaring that the mobile industry a closed “Soviet style” planned economy was not taken well by the CTIA and its main clients, the wireless carriers. However, in the halls, bars and some of the panel sessions, his views were greeted with quiet (look over your shoulder..) applause.

This cry to open up the wireless carrier networks also occurs at a time when the FCC is about auction a valuable chunk of 700 MHz spectrum. This confluence of industry news, trends and events created the perfect storm for one of the more lively and controversial panel sessions I have ever participated.

The title of the session was “Off Portal , razing the closed garden wall”. My colleagues on the Panel were the ever affable, and never afraid to strongly state is mind, Andrew Bud of Mblox, the thoughtful professional of OpenMarket , Steve Shivers. Additionally on the panel were, Fredrik Ruben of Ericsson, who took a surprising aggressive view towards openness and a new comer (at least to me) Jayanthi Rangarajan of Novarra , who was most outspoken on declaring that the Internet is the solution.

Mblox largely benefits from the Status Quo, as they have built a significant business in connecting content players to carriers. The other panelists were either neutral to pro-Openness, with Rangarajan being the most outspoken in declaring the open network, Internet Style, agenda.

My position was this. We have grown the premium SMS market from $80M to over $1 billion in three years. We have done that in an industry with the restrictions, conservativeness and rules of the major carriers. The off portal arena is where the bulk of entrepreneurial   activity is in the mobile industry. So, after we say “good job” and take a bow, the question is how do we grow from $1 to $100 billion?

We cannot accomplish a two order of magnitude increase within the existing industry structure. The mobile economy must become part of and seamlessly integrated with the e-commerce economy of the internet, and beyond.   We must use the phone as a point of purchase device for goods and services that goes well beyond ringtones, wallpaper, alerts and games.

There are two ways to achieve this lofty goal. The first way would be for the carriers to re-think the value chain that has been imposed on the markets and make their networks more open to the free flow of all means of commerce. The carriers have a huge imbedded advantage to capitalize from this next wave of value creation. The ability to bill on behave of, to provide location based API’s, and their own storefronts all places the carriers 90 yards ahead in a 100 yard dash.

The carriers should think of themselves as Amazon.Com.  Amazon has created a powerful commerce machine out of their platform. They have opened this platform to complimentary and competitive services. By making their platform available at a reasonable cost that is competitive with the general the e- commerce market,  Amazon has no doubt forestalled and eliminated the development of numerous competing services. In short, it is easier and more economic to use the Amazon platform for you e-commerce storefront, than build your own.

The wireless carriers can take a page from the Amazon playbook.

The second way in which this openness can occur is to remove value from the carriers (a la Mossberg) and turn their billions of dollars of investment into pure pipes. This will either happen by the creation of an open network competitor via the 700 mhz auction, or entrepreneurs and disruptive technology that breaks down the walls.

In either scenario, change is inevitable. The choice is clear.

If I where the CEO of a Carrier , I would recruit some of the best of brightest from leading E-Commerce companies ; Amazon, E-Bay,  Google, Apple etc., and also from companies such as Visa and American Express.   I would charge these new executives to infuse the necessary corporate culture DNA to make the necessary changes within the Carrier value chain that does not just preserve investment, but creates immense value out of a machine that is in many ways more powerful than the static internet.

The carrier would have to reward these entrepreneurs in a similar manner to their potential outside of a Carrier company. It would be a bold, big move.

If Carrier companies choose instead to play “defense” and try to preserve what they have at the stifling of innovation then they clearly lose.

Even with a 90 yard head start, if you stand still, you will lose.