Give Me Liberty AND Give Me Death?

Give me Liberty and give me Death?

This past Sunday, as I enjoyed a bagel with a schmear, I caught up on the news of the week. I read the New York Times and the local Newark Star Ledger. It is no secret that the newspaper industry is in a real (not virtual) death spiral due to its continual loss of advertising revenue. The fact that some of these same papers have some of the most trafficked web and mobile sites has done little to stem this river of red ink from the nations presses.

The demise of the our nation’s traditional print media is all the more ironic since much of the thoughtful, original news reporting that the Internet so eagerly scoops up is created by the same companies that the Internet and digital media are destroying.

With this as our backdrop, I want to point out a significant problem with advertising, whether it’s printed in the Sunday Newspapers or published on the Web.

The problem is proper targeting. Getting your ad to the right audience, at the right time and in the right context.

Below are photos of the front page and page two of the Newark Star Ledger for Sunday April 26, 2009. The lead story is the ever-increasing Swine Flu epidemic that originated in Mexico. The page one story continues on page two with a large picture of Mexican Nuns wearing surgical masks. The second story on page two concerns the spread of the Mexican Swine Flu to New York.

The most prominent ad on this same page is………

Clearly, someone at the Star Ledger was going for context sensitive advertising and matched the words Mexico in the feature story to Mexican vacation travel. How effective do you think a Mexican travel ad is these days? How much damage was done to the Liberty Travel Agency by having its Mexican Travel advertisement associated with perhaps the worse Flu pandemic since 1918?

Whether this was a machine driven algorithm or a soon to be fired intern who determined the ad placement, an improperly targeted ad can be more than just a waste of valuable marketing dollars, it can actually injure a company’s reputation.

Exhibit B:
Since I did not want to unfairly single out the newspaper industry, I also searched the Internet with terms such as “Mexico Flu”, “Mexico Travel: and “New York Flu”

The first set of interesting results I got were on the website “How Stuff Works?”

The snapshots I show below are very interesting groupings for included Google AdWords advertisements. In both cases, a travel ad is intermingled with ads touting the flu breakout and flu prevention. How impactful will those travel ads be? While not quite as egregious as the Liberty Travel example, it is clear that the Google Adwords targeting algorithm does not exercise the important trait of common sense. 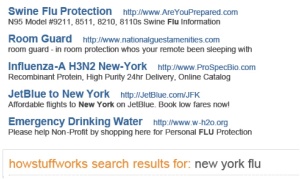 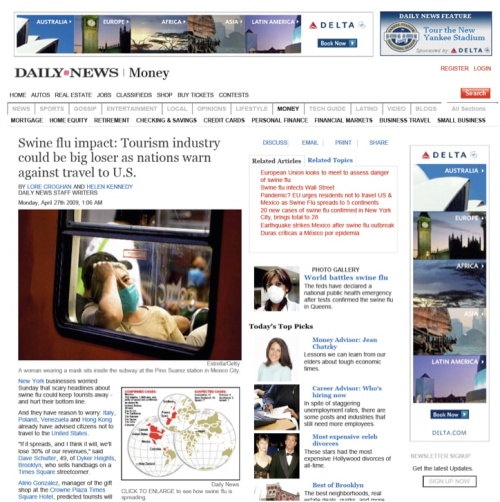 There are several stories highlighting the danger of traveling, especially by air. The Swine Flu epidemic is spreading worldwide and what are the major ads on this page?

Not only is this a waste of advertising budget, it is socially irresponsible.

In all three cases negative editorial content is supported by ads for companies, which are completely out of sync with that content. Touting travel in general, and especially travel to Mexico, in the midst of several stories demonstrating the severity of an epidemic in Mexico is ludicrous.

Exhibit D:
In case you thought I would not include the paper of “All the News that is fit to Print”, I also searched the New York Times website for articles on Mexico. The result of that search is shown below: 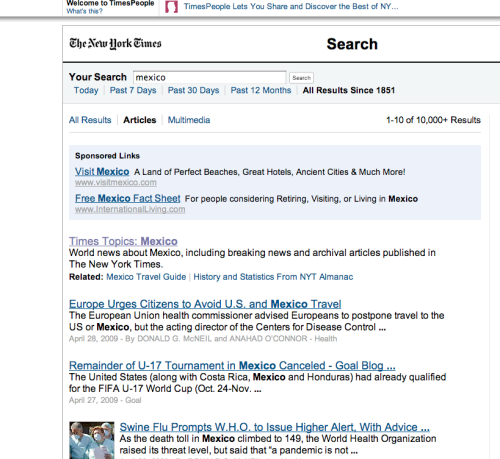 Once again we have travel ads to Mexico. I was actually wondering if there could be legal liability for promoting travel to a destination with a public health crisis and a deadly virus?

For advertising to be effective, and have a substantial ROI , AND not be destructive to a company’s image, the ad must be precisely targeted to the target audience.

This is true regardless of advertising medium.  Print, Web, Mobile – the same rules apply.

Advertise to your precise audience with a product they are presently interested in purchasing.

This is very simple. For the three cases I mentioned above, take out the travel ads and place ads for hand sanitizers, surgical masks and health services.

The key is getting the right ad to the right person, in the right context and at the right time. You do all of this and you have an Ad that should have a nice ROI.

If you don’t target your ad correctly who is the Swine?

3 responses to “Give Me Liberty AND Give Me Death?”